"At Democracywatch we believe that establishing effective and impartial observation is essential for countries with a fragile democracy in their journey to establish democratic norms and values as a part of their political culture."

Elections plays a vital role to ensure democracy and good governance in a democratic state. Our ultimate goal is to establish good governance, fair trial for all, and a humanist nation.

We have been monitoring elections since 1996. We have produced a strong election monitoring team that monitors the pre and post election environment. Over the last parliamentary elections in 2001 we have deployed more than 10,000 election observer to observe the election throughout the country. 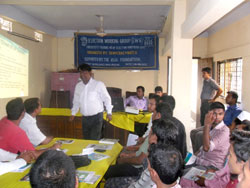 Democracywatch offers extensive, handy, field-based experience in the design and implementation of programs on election processes since 1996 in Bangladesh, including:


The objectives of election monitoring are:

To effectively observe an election with what is estimated at 75 million people, making it the seventh largest in the world, the logistical set up must be appropriate. For election monitoring we have formed a network of organizations working to promote good governance, democracy and human rights. Many already have experience of these activities. Our plan is to provide the volunteers with training so as to implement the monitoring effectively 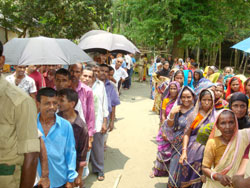 To measure the participation of women voters we have deployed many women observers.

For monitoring we involved as many of our ex-students as possible. They have been trained in Good Governance and we regard them highly. We have strong with grassroots organizations those who are providing observer to monitor elections. These monitors are absolutely non-partisan and non-political. In other areas we will work in co-ordination with local organizations that willing to work with us. 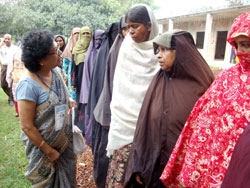 Training Activities
Democracywatch is using the manual that produced by the network in election observation to train each constitutional coordinator (C.C.). The C.C. in turn trains the local observers.

Main Duties of the Observers are: